Hey! These docs are for version 1.0, which is no longer officially supported. Click here for the latest version, 2.8.1!

Ignite in-memory data grid has been built from the ground up with a notion of horizontal scale and ability to add nodes on demand in real-time; it has been designed to linearly scale to hundreds of nodes with strong semantics for data locality and affinity data routing to reduce redundant data noise.

Ignite data grid is lightning fast and is one of the fastest implementations of transactional or atomic data in a cluster today.

As long as your cluster is alive, Ignite will guarantee that the data between different cluster nodes will always remain consistent regardless of crashes or topology changes. 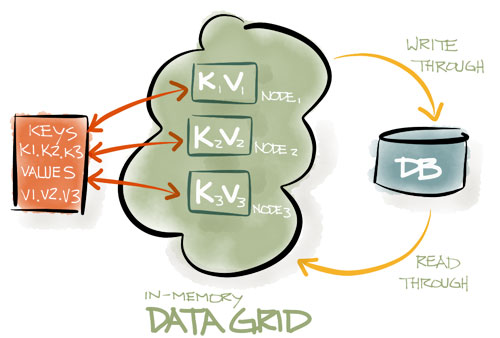 IgniteCache interface is a gateway into Ignite cache implementation and provides methods for storing and retrieving data, executing queries, including SQL, iterating and scanning, etc.

IgniteCache interface extends javax.cache.Cache interface from JCache specification and adds additional functionality to it, mainly having to do with local vs. distributed operations, queries, metrics, etc.

You can obtain an instance of IgniteCache as follows:

You can also create an instance of the cache on the fly, in which case Ignite will create and deploy the cache across all server cluster members.

Updated less than a minute ago